The Queen’s Baton comes to Sandwell – what an incredible day! 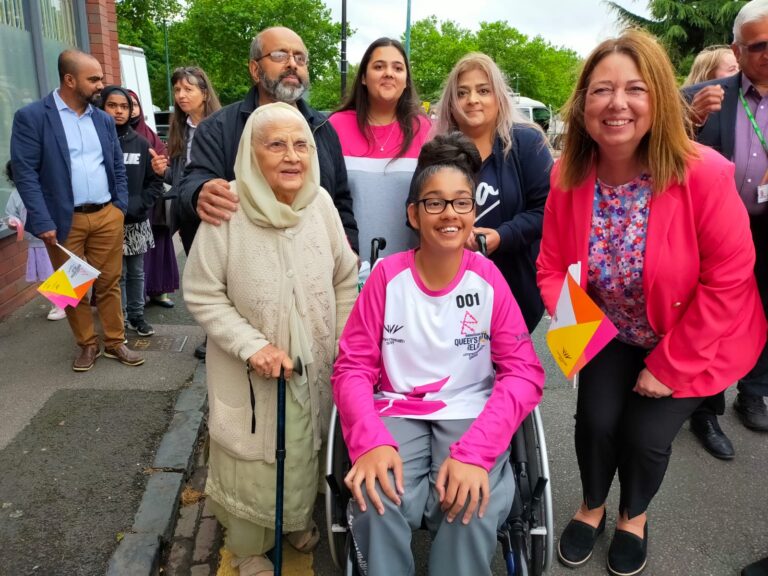 We’d like to thank absolutely everyone involved in the Queen’s Baton Relay. It was an incredible day and a fantastic example of how Sandwell is a Bostin Place full of Bostin People.

Thanks so much to all of our Batonbearers, all of the staff who made the day run smoothly, all of the organisations involved and every single person who came out to cheer them on.

Thousands upon thousands of people took to our streets and parks to welcome the Baton as it travelled through Sandwell and created an amazing atmosphere as we welcome the Birmingham 2022 Commonwealth Games.

We want to share moments from the day with you in each of our six towns – please read on for photographs of many of the incredible Batonbearers and the fantastic reception they had from the public.

Our first Batonbearer was Parveen Kaur, a sporty schoolgirl from Oldbury who had the honour of being the first to carry the Baton in her hometown.

Parveen passed on the Baton and it travelled through Oldbury, carried by Batonbearers including Fitzroy Davis, Abrar Alam and Liam Sheridan.

The event in Oldbury was buzzing with people including Blind Dave Heeley on stage, getting us all in the mood for the rest of the day.

Another fantastic turnout at Wednesbury bus station and at Brumswick Park.

We had a great turn out to cheer on the baton and loved welcoming Perry the Games mascot.

Thank you to everyone who turned out at Victoria Park in Tipton.

There was a lovely family atmosphere at the event and we loved seeing the kids dressed in our Celebrate Sandwell t-shirts.

So many of you turned up at Haden Hill House and Park to welcome the Baton – and the weather didn’t put you off!

The heavens may have opened but that didn’t stop the fun.

The Baton then travelled to Blackheath Town Centre via Waterfall Lane, the steepest hill in Sandwell. A special shout out to Dominic Bryan-James and Leon Rowe who tag-teamed the hill!

If we thought Haden Hill Park was busy – the turn out at Lightwoods Park in Bearwood blew us all away!
Harrison Wright brought the Baton into the park before it made its way around the park and onto the stage.

The crowd’s reaction was amazing when Haseebah Abdullah – England’s first hijab-wearing boxing coach – took to the stage after carrying the Baton on the final leg through the park, before the route set off down Bearwood Road and to Smethwick Galton Bridge.

One of the Smethwick Batonbearers was Parmjit Dhillon, an inspirational man who has done so much for his community.

The final leg of the Baton relay in Sandwell saw it come to West Bromwich.

One of our heroes and all-round Bostin bloke Blind Dave Heeley carried the Baton between Sandwell College and Bull Street.

The Baton was then taken through West Bromwich before arriving at Sandwell Valley Country Park where we held a huge celebration and parade to mark the end of the Queen’s Baton Relay and welcomed the start of the Commonwealth Games.

What an amazing day! Check out more photos on our Facebook page.

And don’t forget you can join us at the Sandwell Festival Site at Sandwell Valley to watch all of the Birmingham 2022 Commonwealth Games action on the big screen!

Starting with the opening ceremony (tickets free but booking necessary for opening and closing ceremonies) and then every day during the Games between 8am and 10pm.

Just turn up to watch the day’s sporting action for free! Including the swimming and diving events from the Sandwell Aquatics Centre in Smethwick.

PrevPreviousKeith Turner – founder of West Bromwich Food Bank
NextKarnell Nunes-Smith – #1 Ranked Swimmer from OldburyNext
We use cookies on our website to give you the most relevant experience by remembering your preferences and repeat visits. By clicking “Accept All”, you consent to the use of ALL the cookies. However, you may visit "Cookie Settings" to provide a controlled consent.
Cookie SettingsAccept All
Manage consent