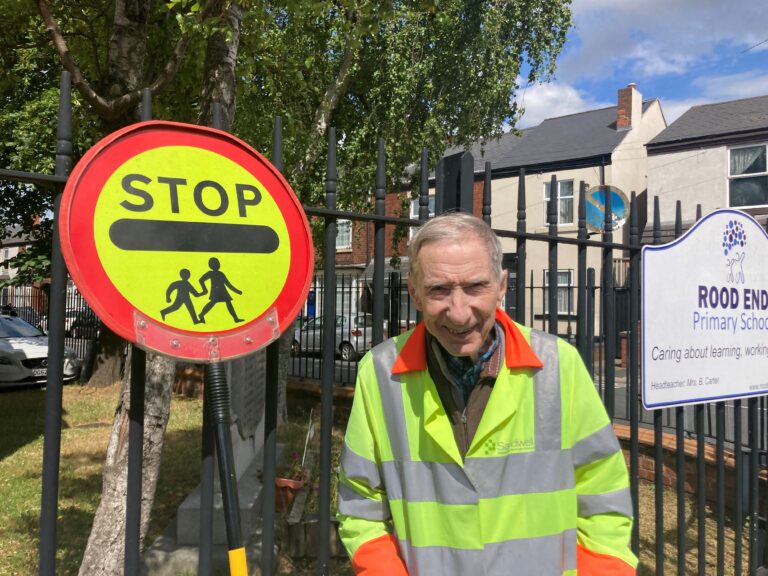 Bostin Brian Kilgallon has been a Sandwell Council lollipop man for more than ten years.

Every weekday he can be found helping children and families to safely cross over the road outside Rood End Primary School in Oldbury.

But his face has become even more well-known – as he’s now a viral TikTok star.

Brian, who is 75, started making TikTok videos with his son Jay Scott during lockdown as a way of keeping themselves and others entertained.

Neither of them could have imagined that their dances and cool outfits would capture the hearts and minds of an audience from around the globe.

That audience includes Grammy-award winning singer and rapper Lizzo – who adored the pair’s dance routine to her hit It’s About Damn Time.

Replying to their video, which has been watched more than 17million times, Lizzo said “This makes me so happy!”.

Brian and son Jay, 28, have racked up tens of millions of views on the video app and Brian gets recognised on a daily basis.

“My job is keeping kids safe at school. The kids are so good. They treat me like a star because of my TikTok success. I’m a viral TikTok superstar – they call me the Hip Hop Lollipop Man,” says Brian.

“The children love it. When cars go past, they’re sounding their horns and saying TikTok to me and it’s just been a fantastic experience.”

Brian says he loves his job and especially likes working for his wonderful boss, Andrena Hadley.

Brian says he is so proud that the swimming and diving events of the Birmingham 2022 Commonwealth Games are being hosted in Sandwell – and he may even make some TikTok videos about it.

“Everybody should be proud of what we’ve got around here,” he says. “The kids are going to benefit from the facilities that are here. I’m very proud to be around here and I will go and watch the Games as well. It’s a fantastic result.”

Brian – you are Bostin. Not only do you keep kids safe every day, you’re putting smiles on the faces of millions of people.

-You can watch Brian and his son Jay on TikTok – @jayscotttttt

PrevPreviousTia Chana – ambassador for young women and girls
NextKeith Turner – founder of West Bromwich Food BankNext
We use cookies on our website to give you the most relevant experience by remembering your preferences and repeat visits. By clicking “Accept All”, you consent to the use of ALL the cookies. However, you may visit "Cookie Settings" to provide a controlled consent.
Cookie SettingsAccept All
Manage consent