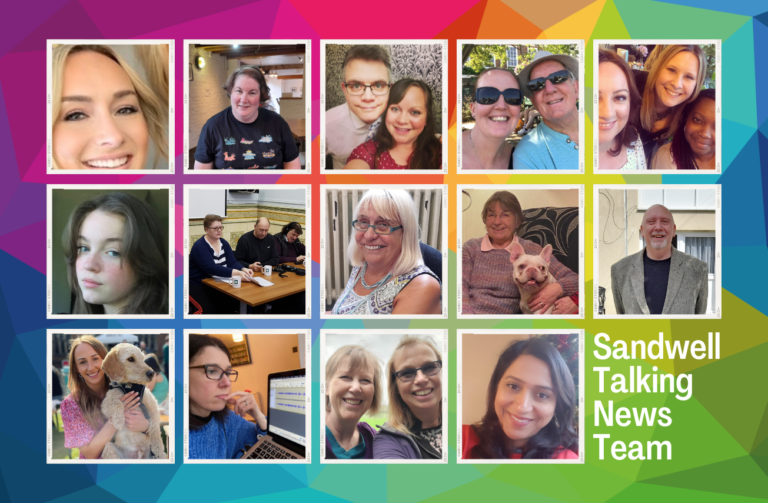 The Sandwell Talking News team are a Bostin bunch. Without them, many of Sandwell’s blind and visually impaired residents would not have free access to all the local news and information they want.

This group of dedicated people are all volunteers. Many of them got involved following an appeal for help at the start of the pandemic.

Sandwell Talking News faced collapse when previous volunteers, who had met to read and record the news in person, were unable to continue due to lockdown. Remote recording was the only way forward. The Talking News is very proud of everyone who stepped up to help at that difficult time.

Every week volunteers read and record local news items from the Express and Star, Sandwell Council news and other information for people with sight loss. They have even contributed original pieces for special editions to lift people’s spirits at Christmas and in the summer lockdowns.

Recordings are sent to the editor/compiler, Ray Gormley, who ‘works his magic’ on people’s contributions to make everything more listenable. Ray is severely sight impaired and he devotes many hours of his time to this task each week. He not only edits but selects other audio items from elsewhere which will be of interest to the listeners.

The team reflects Sandwell’s diversity, with friendly voices welcomed into people’s homes each week. The youngest volunteer is still at school. There are young parents (some who had no children when they first joined the News!), carers, Sandwell Council employees and ex-employees, retired people and people who are visually impaired themselves.

There are teachers, a record producer and musician, an operatic comedian, a holiday rep and marketing professionals. And Queen’s Baton Relay baton bearer Jennie Atkinson who kept listeners informed of her experiences when the baton relay came to Sandwell!

They are all busy people with lots of other commitments. Most have a Sandwell connection. It can be a family affair too: one volunteer roped in her husband and another her Dad to bring in some more male voices when former volunteers could not carry on. Another volunteer’s sister sometimes steps in to help all the way from the USA!

After the initial shock of lockdown, several of the former readers were able to get involved again. They’ve either grasped the nettle of remote recording on their phones, or have taken other roles. One former reader now selects the articles to be read from the Express and Star each day, which requires regular commitment, good judgement and a discerning eye.

It’s not just the volunteer readers and the editor of course. The production team save the final product onto USB sticks and burn off CDs, send them to subscribers and manage the mailing list. And then there is the committee, who set the direction of the Sandwell Talking News and oversee the finances.

The STN operates on a shoestring, funded by donations and small grants, with special thanks to the Tipton Tree of Lights, another Bostin local charity. And thanks also to the support of Sandwell Visually Impaired.

Find out more about Sandwell Talking News – how to listen and how to volunteer!

PrevPreviousJoe Fraser – three times B2022 Commonwealth Games Gold medallist and former Sandwell Academy student
NextThe Digital Den – Bostin PlaceNext
We use cookies on our website to give you the most relevant experience by remembering your preferences and repeat visits. By clicking “Accept All”, you consent to the use of ALL the cookies. However, you may visit "Cookie Settings" to provide a controlled consent.
Cookie SettingsAccept All
Manage consent